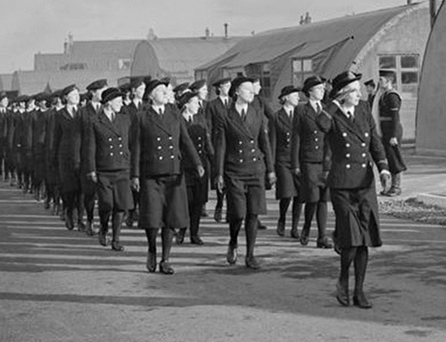 In 1982 St Mary Le Strand was chosen to become the official church of the Women’s Royal Naval Service, the Women’s Royal Naval Reserve and the Association of Wrens.  The ladies paid for the restoration of the bell tower and the dedication took place on 28 October 1984 when the WRNS Book of Remembrance was moved to the church from the Royal Naval College, Greenwich.  Serving and former Wrens worked all the kneelers which can be seen in the church often dedicated to deceased Wren friends. There are two major memorials in the church to Wrens who lost their lives at sea during WW2 on the SS Aguila and the SS Khedive Ismail. The Association holds its annual Carol Service in December and details of that can be found in ‘The Wren’.

Women’s Royal Naval Service was formed in November 1917 to aid the Admiralty fill domestic and clerical roles, but the women went on to serve as despatch riders, MT drivers, boiler cleaning on trawlers and drifters, and working on depth charges, and each one freed a man for sea.  In November 1919 the WRNS was disbanded and in 1920 the Association of Wrens was formed to keep alive the ‘esprit de corps’.  In 1939 the WRNS were reformed to again serve beside the Royal Navy.  This time their jobs were far more expansive and the women served in clerical and domestic roles and as Boat’s Crew, Boat Driver, Boom Defence, Chart Corrector, Mine Watching, Parachute Packer, Submarine Attack Teacher, Wireless Telegrapher, Plotters and Decoders.  The war gave women the opportunity to carry out work that they would not otherwise have dreamt of doing.  After the war the WRNS continued but on a much smaller scale and gradually their jobs became more integrated with the men of the Royal Navy until in 1983 the first women went to sea.  Now subsumed into the Royal Navy the women serve on an equal footing on ships, in submarines, with the Fleet Air Arm and ashore.

The Association of Wrens and Women of the Royal Naval Services changed its name in 2018 to recognise and welcome the women serving in the Royal Navy today.  It still upholds the ‘esprit de corps’ of service life.  In 2020, as part of the Associations’ centenary celebrations they laid up their old standard here in St Mary le Strand and dedicated a new one showing the new name.  Members keep in touch via the website (www.wrens.org.uk), Facebook, our magazine The Wren, Branches, Informal Groups, mini reunions and national reunions.  We also support the WRNS Benevolent Fund which helps all former Wrens in time of need (www.wrnsbt.org.uk).